What describes the Cultural Heritage of Ireland? – A Twitter Based Game

It’s been a long time since I’ve posted here, though I aim to keep this blog up to date. On Saturday 23rd March, I aim to host my fun-filled twitter game in Faber Studios, Limerick City and online. From 11am onwards (GMT), I will be both streaming and demonstrating this game in a physical space.

What exactly is this game?

The game consists of three stick men, each very eagerly awaiting their destinations; the top stick man wants to go to a pub, the middle stick man wants to visit a landmark and the bottom stick man wants to visit a museum. Though only you can help them get there! Using a hash tag, tell twitter what you think describes the cultural heritage of Ireland (#irepubculture1 for pubs, #irelandmarks2 for landmarks, and #iremuseums3 for museums). You can even describe a funny story if you wish! Once the stick man reaches his destination, some fun filled facts about that particular heritage of Ireland will display. This game will be streamed online, so you don’t even have to be at the venue to take part in this adventure game! Below is a very simple prototype of the game working. Though you do need a twitter account. I’ll provide you with a link to the game very soon! 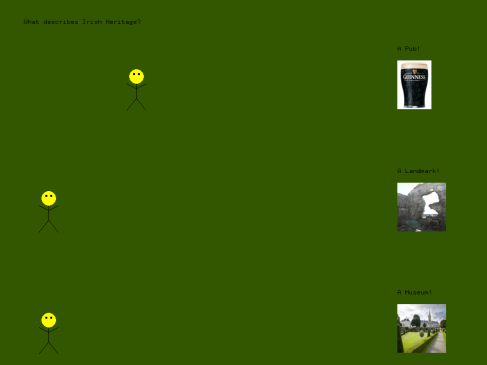 The results will also be shown visually in Faber studios on a 1 x 6 RG LED matrix!

Fantastic! I would love to share this information with you. I built the program in openframeworks, a very neat open source platform to program graphics using c++. There is a very simple library called ofxTwitter that you can use to access twitter information. In my program, I perform a search for 3 different tags consecutively. Once all three tags have been searched for, I search again. However, I take care not to include searches I’ve already accounted for.

If you ever choose to incorporate internet searches in your programs, keep in mind that the internet connection you use may be slow. You should schedule your searches and gathering of information on timed events so nothing gets out of sync (think about it – if your internet connection is slow, it takes a while to load a page. It’s the same on a program!).

The next element is the LEDs. I’m using a very simple arduino UNO board to program these. I’m programming the arduino using openframeworks. By loading the standardFirmata example in arduino (file – examples – firmata – StandardFirmata), you can use arduino with pretty much any program that has an arduino library with firmata. The LEDS will display a visual of how many people chose what result on a very small 6 x 1 matrix of small LEDs. Below is a demonstration:

A prototype of the leds responding to twitter data

The connections to the arduino board

If you have any questions about this experiment, please feel free to email me at laura.maye@ul.ie